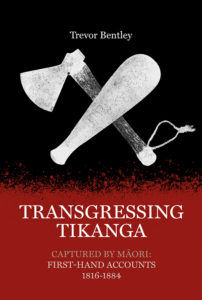 First contact between Europeans and Māori was often fraught and gave rise to cross-cultural tensions, which continue to resonate in contemporary New Zealand.

These captive stories illuminate the lives of New Zealand’s early pioneers and reveal how, in Māori eyes, taking Pākeha captives was a tika (correct) or appropriate response to European transgressions. Indeed, they were seized with good reason: for committing blatant acts of aggression or unknowingly transgressing tikanga Māori (customary law), for which utu was required.

As Bentley says, ‘To take a Pākehā captive was tika, the correct response to a transgression such as the plundering of tapu crops and sites, or the killing and kidnapping of Māori men and women by ships’ crews. It was, additionally, a response to the violence, destruction and dispossession visited upon Māori communities by British and colonial troops, avaricious colonists and colonial governments, the legacies of which continue today.’

These dramatic, action-packed captivity narratives create a vivid picture of interactions between Māori and Pākehā in the nineteenth century. They also provide rich insights into early Māori life, including principals of captivity and utu, social order, religious practices, everyday customs, and the conduct of warfare. Alongside each account, Bentley provides detailed background notes which give historical, geographical and cultural context. He also includes biographical information and, where relevant, comments on the authenticity and reliability of the narratives.

Restoring the Māori captivity genre back into New Zealand’s literary canon, Bentley is scholarly and balanced in his approach. While unflinching in highlighting what, to European eyes, may be deemed savage and macabre, he is aware of the ‘overblown rhetoric’ of some of the captive narratives, saying, ‘Like the narratives of Europeans captured by American Indians and North Africa’s Barbary pirates, Māori captivity narratives had a distinct agenda. Highlighting the ‘savagery’ and ‘otherness’ of their captors, they served as anti-Māori propaganda and reinforced racial stereotypes.’

‘Those that described in gruesome detail bloody massacres and/or cannibal feasts warned settlers and potential settlers about ‘savage’ Māori, and helped make the case for the British annexation of New Zealand,’ said Bentley. Transgressing Tikanga makes an important contribution to the understanding of our early history, recalling events long forgotten or expunged; casting light on one of the least studied outcomes of Māori Pākehā interaction.

Trevor Bentley grew up in Auckland and is of Samoan and European descent. He forged a career in education, with stints as a secondary school history teacher and Director of Adult Education for four colleges in the South Waikato. Bentley holds an MA (Hons) in New Zealand history from the University of Auckland and a PhD from the University of Waikato. His special interest is researching and writing about the interaction of Māori and Pākehā in pre-Treaty New Zealand. Bentley is the author of five books, including: Pakeha Slaves, Maori Masters: The Forgotten Story of New Zealand’s White Slaves and Tribal Guns and Tribal Gunners: The Story of Maori Artillery in Nineteenth Century New Zealand. He now lives and works in Tauranga.

I love everything about communications, representing and making things happen for my clients. My working life has allowed me to work with some incredible people and thought leaders in New Zealand and overseas.

During my PR career, I have worked for Penguin Books UK, Midas Public Relations and Random House NZ. In these roles, I have promoted the work of such great talent, including Sam Hunt, Parris Goebel, Diane Foreman, Dame Fiona Kidman, Kate Atkinson and Richard Dawkins.